South Aceh District Head Tgk Amran condemned the deaths of these critically endangered animals that are native to the island of Sumatra and urged the local police to investigate the case.

The Sumatran tigers, including two 10-month cubs, were found dead after being caught in wild boar traps that a poacher had set inside a conservation area on August 26, 2021.

The poacher, who is suspectedly responsible for the deaths of 10-year-old female tiger and her two cubs, might come from outside South Aceh, he stated in Tapaktuan, the capital of South Aceh District, on Friday.

Amran claimed that local residents, who rely on forests for feeding their families, do not set any trap that may harm endangered wild animals.

All endangered wild animals, including Sumatran tigers, must be protected and preserved, as they are the wealth of the nation's natural resources that can be passed down across generations, he stated.

"South Aceh residents have coexisted with tigers for so long. During an armed conflict in the past, the tracks of tigers had become a helpful guide when I got lost in thick forests," he noted.

During the armed conflict between the Indonesian government and Free Aceh Movement (GAM) in the past, Tgk Amran was a former commanding officer of GAM in the Lhok Tapaktuan region.

Sumatran tigers, the smallest of all tigers, are currently a critically endangered species only found on Sumatra Island, Indonesia's second-largest island.

The tigers are on the brink of extinction owing to deforestation, poaching, and conflicts between wild animals and local people owing to their dwindling habitats.

The exact figure of Sumatran tigers left in the wild is ambiguous, though the latest estimates range, from under 300 to possibly 500 at 27 locations, including at the Kerinci Seblat National Park, Tesso Nilo Park, and Gunung Leuser National Park.

According to the World Wildlife Fund (WWF), their numbers have decreased, from about one thousand in the 1970s.

The 2009 report by the forestry ministry points to conflict with humans being the biggest threat to conservation. The report cited that on average, five to 10 Sumatran tigers had been killed yearly since 1998. 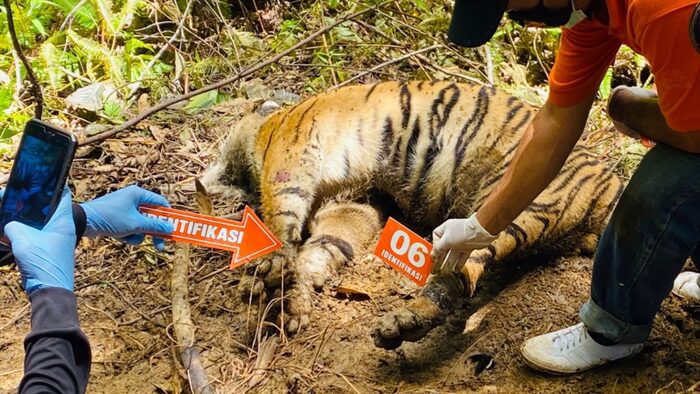